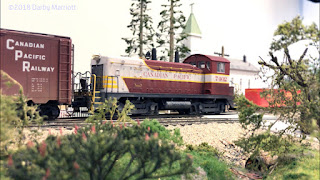 Three of our group were available to bring our modules to Copetown this year. Paul Raham exhibited his Marshall Station module, John Johnston brought out his Burnt River section, and I displayed my Culverhouse module. I also hauled out one of the group’s four-foot train turntables.

This was in fact the identical setup used three months earlier at the Belleville Christmas Train Show.  The combination creates a modest 35-foot long display, but one that works very well with a smaller crew. 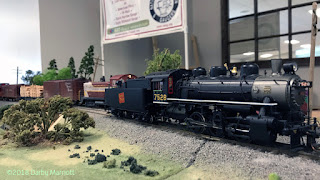 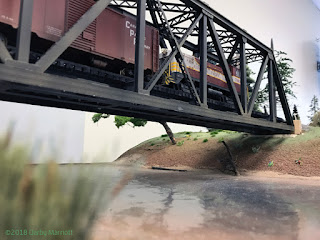 Two trains were the max for this setup: One operator would use Paul’s end-of-line module to turn the loco and swap ends on the train, while a second operator ran a train after making a full 180 on the train turntable. The two trains would meet at the passing siding on John's module. 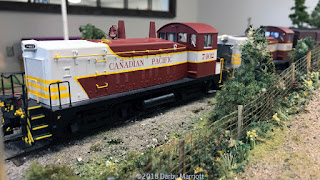 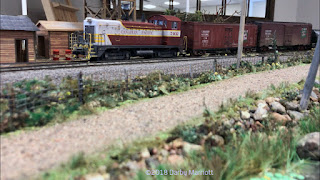 John ran his River Raisin 0-6-0 and 44-Tonner along with his S Helper Service 2-8-0. We even gave Simon Parent’s visiting 2-10-2 a short back and forth, but of course turning it on Paul’s 60-ft turntable was out of the question. (And I'd like to give a shout out to Neil Froese, another S scale enthusiast who dropped by for a visit.)

Darby’s BlueRail battery conversions generated a lot of interest and I took the opportunity to give him another loco to convert: my recently acquired CNR GP-9 that William Flatt custom detailed and painted.

We met a new modeller to the area, Wayne Wessner. Wayne, who moved here from Regina, models in HO and makes some mighty fine trees. In fact he gifted one to John so in return we’ll give him a plug. If you need some fine looking foreground trees contact Wayne: wwessner1@gmail.com

The Copetown show's format has changed since our last appearance. The Saturday is now an RPM meet. Sunday remains as a public train show. There were only three layouts at the Sunday show:  ours, Brian Dickey’s lovely 7mm (British O scale) Roweham switching layout and a small HO table top layout. However ,the public seemed not to mind: They simply paid more attention to each of the layouts.

All in all, a fun weekend!