I spent a most enjoyable weekend at the huge annual Railroad Hobby Show in Springfield, Massachusetts.

As any experienced S scaler would expect, there was some 1:64 modelling in evidence ... but not nearly as much as one sees in HO, N and O.

But I went to the show with modest expectations, deciding I would look for S scale figures with which to populate my home layout and my in-development module for the S Scale Workshop. And I scored big, bringing home almost two dozen S scale people and about 50 birds, dogs and woodland critters.

Most of my people and my dogs came from Artista and it was great to see them in person before purchasing.

For animals, I found birds and critters labelled as HO scale, but which seem pretty large for HO - much better for S.

I also enjoyed meeting, and speaking with, a few S scale enthusiasts, including Dan Navarre at River Raisin Models and modeller Pieter Roos.

It's starting to get noticed on newsgroups so I guess we can announce it here...

The world of S scale just got a bit bigger, with the creation of a new NMRA-affiliated Special Interest Group (SIG) to promote scale modelling in 1:64.

The S Scale SIG intends to serve as a single, reliable source for information about S scale for hobbyists and manufacturers. It also intends to promote the scale to the wider world of scale model railway enthusiasts.

To that end, one of the SIG's initiatives is the S Scale Journal, an online publication. Two editions are already online and available for your enjoyment - including a profile of the S Scale Workshop and a fascinating history of S scale manufacturer Pacific Rail Shops.

Best wishes to the founders of the S Scale SIG. I look forward to watching this Special Interest Group grow and flourish.

As mentioned earlier on this blog, the S Scale Workshop will be displaying its modular layout at the 2012 Copetown Train Show, held this year on Sunday, February 12th.

Workshop member Pete Moffett has been working with the Copetown organizers — and this year's show is going to demonstrate the flexibility of the group's modular system, inspired by what's being done by Free-mo enthusiasts in HO scale. As the final room arrangement shows, the organizers have given the Workshop an S-shaped space (appropriately enough), tucked around the massive HO scale Bayview Junction modular group.

The S Scale Workshop expects to display the following modules:

A train-length turntable will serve each end of the line.

We're looking forward to seeing many friends at the show! 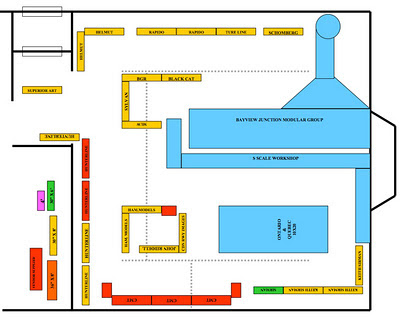 New photos can be found at : Layout Progress

I have completed the west end ladder for the freight yard. I also painted the rail. One photo show all the masking required. Previously I was using Floquil rail brown color but this time, since I am more conscious of my family's health, I did not want to spray enamel paint in the house without proper ventilation, obviously difficult in the layout room. So I went to the hobby shop hoping to get the same or similar color in acrylic base paint. The hobby shop owner suggested me the Dirt color from Poly S, it is actually pretty close to rail brown and I am satisfied of the results. This paint can be diluted with distilled water (which I did) instead of a solvent for airbrushing. I only wear a regular dust mask for proximity paint fumes and there was no odor in the house (I didn't get any complaints from the wife or the in-laws that were staying with us over the holidays).

I made a pretty good test of my trackwork last night, doing a pull/push operation with 14 full length passenger cars through curved turnouts and yard ladder. No derailment (after I found a turnout in close position) . My Pacific 5587 (build from Andy 's kit over a USRA Pacific mechanism from Overland) was assigned to this operation.

I had however to upgrade all the passenger car's wheels and coupler mounts. The AM Pullman "scale" wheel that come with them do not respect the NMRA contour. the wheel gauge is good but the flanges are too high. Their profile is wide (0.125" instead of 0.110") but this do not affect the operation. Since I did not want to make an expensive bulk order to NWSL for new wheels, I have machined a pot chuck to accept the AM wheel and reduced/re-shaped the flange to match the NMRA profile without taking them off the axle. I did not change the width however as this was not possible in my set up.

I also removed all the tango mount couplers and re mounted them on the car body with a screw and 1/8 spacer. This is not the most elegant way but good enough for now. All these cars will either get chopped to build CN coaches or detailed and repainted for CN sleepers. Just another project for my old days..

Now I will take a break from the layout construction. Ski season will start soon (hopefully) and I have the bathrooms to re-model before getting back to it. Next step on the layout will be to build the turntable and finish the trackwork at the engine facility. That include in addition to the engine terminal and coal plant access, the caboose and coal hopper yard and reefer icing platform. (on the latest photos, you can see that I started to lay some ties) 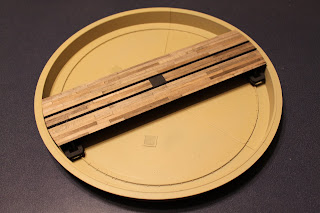 Last evening I was finishing up Connor's On30 turntable, it dawned on me that it could be a perfect small S Scale Turntable 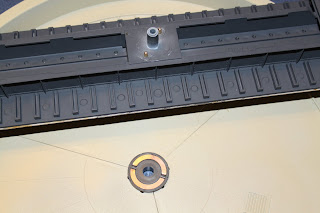 . The turntable is a PECO OO/On30 turntable. I have basically built it as stock, with the addition of individual boards on the top, and Code 83 rail instead of the Code 100 in the kit.


A quick trip down to the S Scale layer confirmed it will accept Simon's moguls and ten wheelers, but is too small for the Pacifics and Mikes some of us have.


Hopefully this will work as well as I think it will.


The kit is not cheap, but less than most commercial turntables around. Jim hunted around at Christmas Train Show in Toronto last November and found this one for me at $75.00. Not too bad. I believe generally they are about $100.00 in stores, but Ebay may also be a good source.

Things for the new year.

The New Year brings all sorts of new possibilities. For Christmas I built Connor (7 years old) a On30 layout to start with (unofortunately some family stuff prevented me from getting it running for the big day). So far the benchwork is done, and the track is about 50% built. I am hoping to have it running in the next 2 or 3 weeks, and then I can think about S scale again.

Trevor's new adventures has definately hit home. I usually try to do too much for the space available. My layout has a basically functioning Port Rowan on it, to go with Muskoka. But nothing in between. I am hoping a rearrange of the pieces would allow for some nice running between the 2.

While recovering from a rather silly New Years yesterday (don't ask...) I started sketching some possibilities. What I am hoping to do is build some open running, possibly including a corner, that can be used at home and in the Workshop layout. One thing I really like is fields and open country, both lacking slightly in my home design, and the workshop layout.

A few more feet of open country, and bringing out the newly adopted (from Chris) Marshall's siding would really make for some great open running.

But for the time being back to the On30 so I can keep a rather excited 7 year old focused on Model Railroading rather than Super Mario.....