My model railroading activities have slowed down somewhat. With our 50thwedding anniversary approaching, Cheryl and I have turned to sorting through thousands of slides and family photos. (There are some shots of young people who look suspiciously like we used to.) However, the hobby hasn’t gone totally wanting: I have been playing with my battery powered turnout idea.
---
I’ve concocted a prototype all-in-one throttle case using the cheapest of materials. My smart phone throttle is smaller than most new examples, so I bought an iPhone 6 protective case at the local dollar store and went to work. 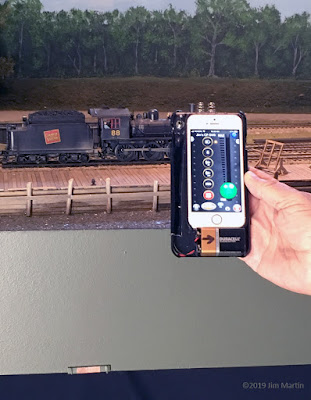 Double-sided contact tape holds the throttle and turnout battery in place. A double pole-double throw switch connects the battery to a strip of Printed Circuit Tie with contact springs soldered to it. Now everything fits in one hand. To operate a turnout, I simply flick the toggle switch while touching the spring contacts to the strip at the bottom of the layout facia. (If you are new to this blog just go back a few posts and you’ll see what I’m fooling around with.)
As a bonus, there’s also room for an uncoupling tool beside the throttle. So far, everything has been working reliably although I’m not sure it isn’t just as convenient to carry the 9-volt battery separately. Time will tell.
---
Old money: It pays to open your railroad books a little more often. While I was sorting my library, a book fell open to where an envelope had been hiding for ten years. $120 fell out, along with a receipt from 2009 written by my late friend Oliver Clubine of Ridgehill Hobbies. That must have been the change from the loco I bought.
It’s like a Revenue Canada refund: It’s your money and you could have been having fun with it, but nevertheless it still feels like Christmas.

---
I attended a plastic modellers show in Hamilton about a month ago. Damn, those guys know how to paint and weather! 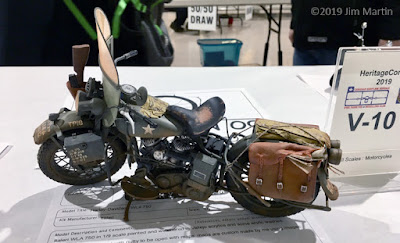 If you’ve never attended one of these shows, you should. You’ll find products and techniques not generally known to the model railroad community and, like us, they’re a helpful bunch.
---
Finally, before drywall screws became so popular for layout construction, we used to bore Americans by touting the virtues of the Canadian-developed Robertson socket head screw. While attending a business meeting in Milton, Ontario in April I happened on the old plant. 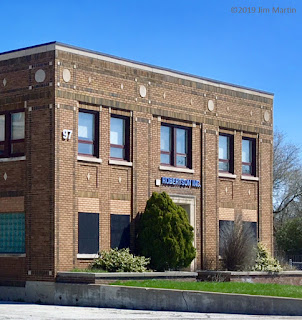 Even though it’s been empty for a long time it still looks well kept. It’s a handsome old building and I got to thinking that some entrepreneurial sort might make a go out of offering iconic Canadian structure kits…the Robertson factory… the Lightning Zipper factory in St Catharines…  the first Canadian Tire store… the first Princess Auto store in Winnipeg… the first Tim Horton’s… and so on. The idea would never work in S – the market’s not large enough. But in HO?
Enough of the basement: The MG is waiting outdoors.
Cheers!
Jim