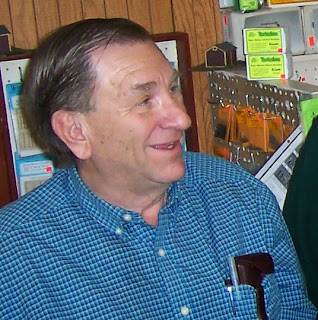 Oliver, our group founder, was a driving (no pun intended) force among us. Friend and mentor to all, he was an award-winning modeller who was always willing to share what he knew with others.

Oliver's day job was race cars, both building and driving. Any car leaving his Britain West shop in Brantford, Ontario was fast - and with him at the wheel, it was usually even faster. Perhaps it was the quiet of the hobby workbench that appealed to Oliver after a day of revving motors...

Among Oliver's contributions to the hobby was his fine line of resin rolling stock kits marketed under the Ridgehill Scale Models name. His Fowler boxcars and and CNR van (caboose) kits are still highly sought after. He also produced a line of useful, inexpensive structures under the Ridgehill name.

Oliver's son David keeps the spirit alive for us. David is an active member of the S Scale Workshop. He is also breathing life back into the Ridgehill line and continues to grow the family's racing business.

Oliver's last time out with the Workshop was at the popular Copetown Train Show in February, 2014. His participation remains a happy memory for all of us.