I have been busy building my basement model railroad and working on an article for the NASG Dispatch and one for the CN Lines.  For these reasons, I have been lax in posting here.

Too, under the urging of Trevor, I have started a blog of my own about the construction of my layout.  The layout was started in the fall of 2016.  The blog was started November 2018 and if you are interested in following its progess, the address is https://cnrparkhead.home.blog/

Here are the track plans. 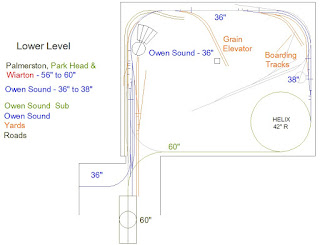 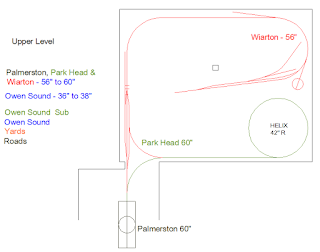 So there you have it, a blog about a blog.

Andy Malette
Posted by Andym at 8:19 AM No comments:

(The return of A Man With A Plan...)
Workshop member Jim Martin models the Canadian National Railways line to Port Dover, Ontario. As reported elsewhere on this site, Jim moved in 2018. He starts the new year with this report on his progress in his new layout room...
---
Work progresses nicely as the Port Dover Branch is now fully integrated into its new home. I’m a couple of sections of flex track short of being able to run from one end to the other, but I’m going to pick up a few lengths from Workshop buddy Andy Malette and then I’ll be able to drive the last spike later this month.
New Jersey pal Joe Kimber has kindly done a new drawing for me. Here it is, along with the old drawing for comparison.

Comparing the two drawings you can see that with one exception - Culverhouse - the principal elements remain in the same order if not along the same walls. Perhaps I could have put more layout in the new space but as I’ve mentioned earlier it would have crowded the room. That is something I didn’t want. My sense of design requires the layout to compliment the space, not dominate it.
Happily Culverhouse is still around and in the capable hands of Workshop member Darby Marriot.
The old layout consisted of Port Dover, Culverhouse, Silver Lake, a 180 degree curve, Lynn Valley and Simcoe. The new arrangement is Port Dover, a 90 degree curve, Silver Lake, a 95 degree curve, Lynn Valley and Simcoe.
I have lost a few sidings in the process. Culverhouse is gone, of course - as is the switchback from the Port Rowan branch exiting Simcoe. For the sake of simplicity what was to be the old Port Rowan branch does not pierce the backdrop as originally planned so I lost the room for a switchback.  Instead the track is truncated to become a fuel depot siding.
To make up for those losses I will be adding another #6 switch at the Silver Lake depot and will run a couple of tracks to a large mill structure in the corner. This is freelance so I have not yet decided what sort of mill it will be. For the time being, I’m naming it Sumkiynda Mill. I also have to construct the staging shelf for the Lake Erie and Northern and run the track through the backdrop to the Silver Lake depot.
It was necessary to swing the #8 switch behind the Port Dover coal yard toward the backdrop in order to widen the curve leading to Silver Lake. The curves in both corners, each approximately of three-foot radius, have been super-elevated.
A couple of dummy tracks will play scenic roles. One is the LE&N track crossing the CNR at Lynn Valley. The other will be a spur at Simcoe that simply vanishes behind some buildings. I will also be trying to find room for a dummy freight track (not yet illustrated) at the LE&N station at Silver Lake. There may be room for a turnout that would make it functional, but not if it has to be shoehorned in.
Why a 95 degree curve in the one corner?  That was necessary to swing Simcoe out and away from the basement stairs to allow access to storage and the rooms beyond.
I’m pleased at the ways things are progressing. I’ve been able to reuse almost the entire layout along with most of the backdrops and lumber that supported it. The only real money I’ve had to shell out has been for the false wall behind Simcoe and a new section of aluminum backdrop.
There is much more I could write about but I’ll save that for future visits. At least then, you the reader will have a notion of what I’m describing.
Cheers!
- Jim
Posted by Trevor at 11:07 AM No comments: