Copetown 2016 in the Rear View Mirror 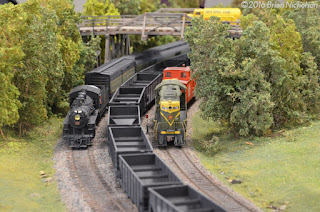 The 2016 Copetown Train Show get-together is a diminishing dot in the rear view mirror. But Copetown, Ontario (population 130) is an important dot on our calendar. It’s a high-end show, in a bright and cheerful hall, in a pleasant place.

I think I can speak for the rest of the guys when I say this was our most enjoyable show ever! 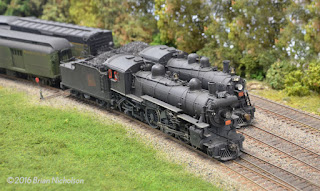 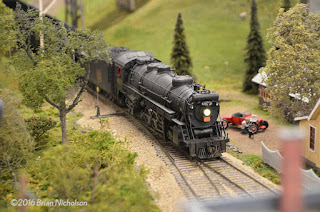 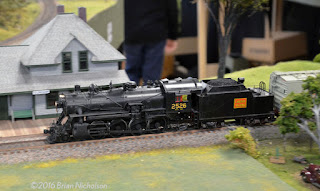 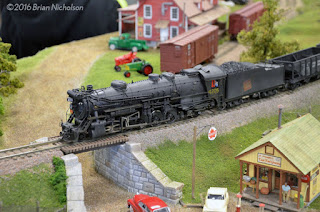 I won’t repeat what makes this show important to so many of the more experienced model railroaders. You can reference our Feb. 25th blog post for that. But the feedback from Copetown attendees is always encouraging, given that so many accomplished hobbyists attend the show. (Thank you to everyone who stopped by to say hello.)

Simon and Brian got up very early Saturday and drove straight through from Montreal. They then had to drive straight back after takedown on Sunday. Talk about a gruelling weekend! By the way, kudos to Brian for his photography in this report.

Also, our French-Canadian buddy, Claude Demers flew up from his U.S. home just to help out this weekend. He and the Montreal guys stayed at Andy’s Saturday night.

To celebrate the group’s anniversary David brought along his late father Oliver’s Grandview Co-op module. Oliver continues to be missed. 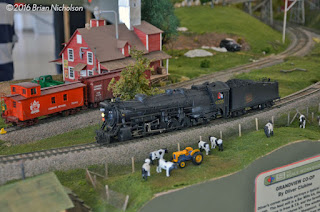 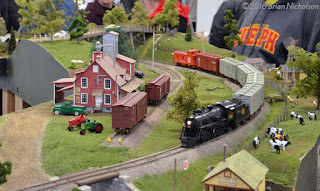 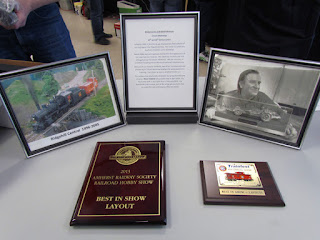 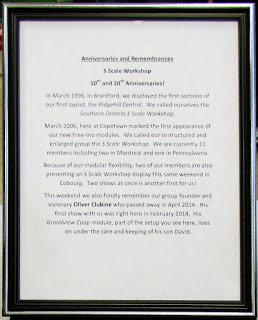 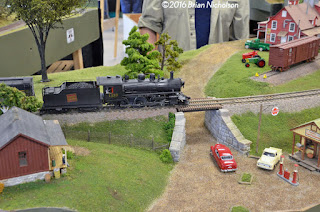 It was great having David back with us. His race car profession leaves him very little time for us through most of the calendar year, but Copetown is an event he always aims for.

S-scaler-in-waiting, Fredrick was again out to help, and to wow us with his N-scale 3D printing projects. It’s about time he showed off his talents on this blog, especially since he has offered his services for any printed S scale bits we may need. (That's a hint, Fredrick!) Fredrick did an impromptu clinic on 3D printing and attracted a lot of attention from fellow exhibitors.

Andy of course is our group stalwart, who to my knowledge has made it to every show since joining us.

And yours truly was there. My thanks to David for offering me a bed at his house. It’s safe to say we did less damage to ourselves Saturday night than all those wacky guys at Andy’s. 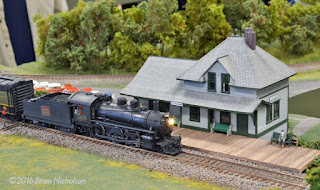 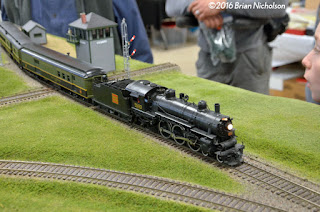 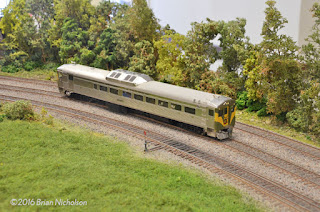 Rounding out the weekend, Trevor swooped in on Sunday - and brought along a miniature movie camera mounted to a flatcar. You can view the videos here: 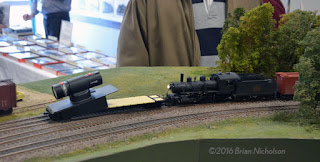 Check Trevor's blog for more about this camera car.

It’s really mesmerizing to see one’s work from a track level perspective - and so much better than crawling along on one’s belly: Belt buckles wreak havoc with switch points.

Other S Scale enthusiasts who came out to visit include Chris Abbott, Andrew Baird, William Flatt, Neil Froese and Clayt Peter. (My apologies to anyone else I may have missed.)

I’ve already mentioned how well things worked on the weekend. After ten years we appear to be getting the hang of things. A large part of the credit may be due to Simon’s huge presence. The power supply he brought is bullet proof, his laser level was a huge help in setup, and his modules - which comprise at least half the setup - are flawless in their operation. So, no electrical glitches, almost zero derailments and yours truly managed not to run a single train (and thereby not run any switches) for the whole weekend.

As for the rest of the show there were some interesting changes this year.

- We were the only large layout at this year’s show so the rest of the hall was set up for movies, slides and clinics during the afternoon.

- Most of the vendors and manufacturers were allowed sufficient set up time on Sunday morning ahead of the public show.

Too many train show organizers allow their exhibitions to go stale: the same old thing every year. On the other hand, one has to be careful when tinkering with a still-successful formula. I think Steve Tuff and the rest of his crew did an admirable job of walking that tightrope this year.

If you have never made it to Copetown put it on your list. Will we be back next year? Maybe, but as noted above we think change is good, so we won’t be upset if another layout is invited. 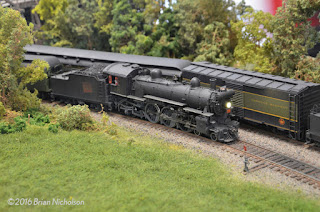 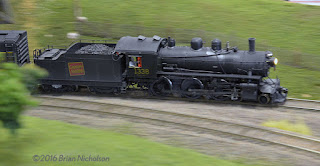 (Want to see the S Scale Workshop? Check out our events page to find out where we're exhibiting!)
Posted by Trevor at 12:27 PM