Merry Christmas everyone, and best wishes for a healthy, happy and productive New Year.

It’s been a while since my last report. Unlike my prolific blogging and modelling pal Trevor Marshall, I’m afraid I work only in seasonal spurts of energy. However, a quiet Christmas season this year is affording me the opportunity to move ahead once more on my home layout.

I have returned to work on the other end of the layout, the Simcoe staging area.  Track work is well along, but before proceeding any further I wanted to get to work on painting the backdrop.

In this location I want the skies to look colder and more threatening. I’ve been inspired by the cloudy backdrop paintings on Troels Kirk’s Coast Line RR On30 layout in Sweden. However, Troels is a professional artist - and I most assuredly am not. Nevertheless, with a photo album of cloudy skies on my tablet, I set out to make the heavens angry.

After a number of hours of noodling around with dollar store acrylic paints, I came up with what you see here: 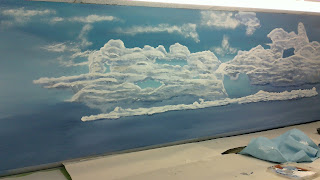 To my way of thinking it wasn’t totally awful... but then I set the buildings back in place: 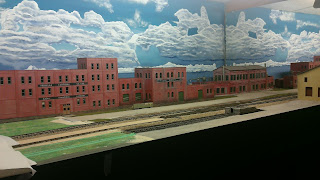 First, I noticed how the distinct cloud patterns betrayed the presence of the large mirror at the end of the layout, thus shattering the illusion I wanted to create with the reflected structures.

Second, my wife Cheryl confirmed what I already feared. “Shouldn’t I be looking at the layout first?” she asked. That was it. Out came the broad brushes wielded in long, horizontal strokes: 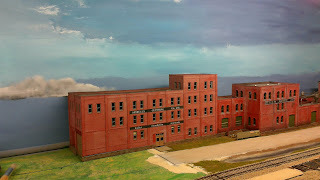 In this photo, the scene is way more pleasing to my eye, yet still holds the threat of rain. I still have to do a line of autumn trees behind the buildings. Then I’ll decide whether or not that low cloudbank stays.

The forecast: Clearing skies but changeable conditions for the foreseeable future.
Posted by Trevor at 2:12 PM No comments: