My friend Stephen Gardiner has been designing an HO scale model of the CNR D-1 - a streamlined motor - and its two trailers, C-1 and C-2. And from the first time I saw his drawings, I've wanted one to run on our S Scale Workshop exhibition layout.

I'm pleased to report that this project is now coming together. Stephen's HO model is 3D printed from his own drawings, and he's been graciously converting his design to S scale for me. On the weekend, he announced it was ready, and I wasted no time in placing my order with Shapeways. The body shell should arrive in about two weeks. 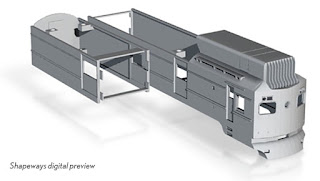 Stephen is still working on converting his designs for the two trailers to S scale. Meantime, another friend - Ryan Mendell - used a water jet cutter at work to cut a frame for me from a piece of .125" thick brass: 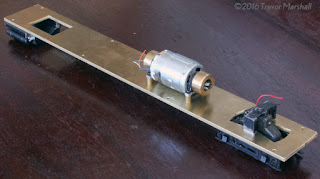 The motor and front truck are from an S Helper Service SW-1, which I purchased (used) from fellow Workshop member David Clubine. I've ordered a suitable trailing truck from American Models, plus trucks for the two trailers.

While I wait for the D-1 shell to arrive, I'll work up a list of detail parts I need to order from BTS and other sources to complete all three pieces. But thanks to the help of many friends, I'm confident the D-1, C-1 and C-2 will be rolling on the Workshop layout some day...

I'm writing more about this project on my personal layout blog. Those interested can find all the entries related to D-1 by following this category link.

In which Workshop member Jim Martin reports on some 2-6-0 progress by Andy and Paul, and provides a capsule history of a landmark S scale kit...


Andy Malette has recently shared some photos of his latest accomplishment. He has successfully completed (almost), a Canadian National E-10 Mogul kit that was offered some years back by S Scale Loco and Supply. 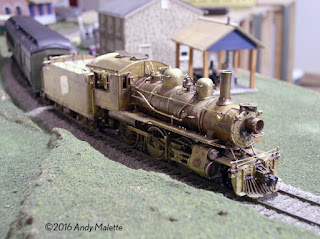 It has hardly been a shake-the-box kit as it has taken Andy 10 years to complete. More about that timeline a little later, but Andy tells us it’s an excellent kit. 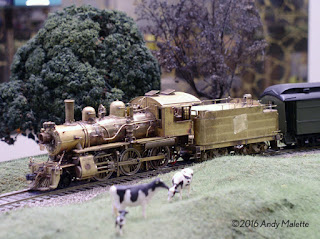 He has added a few personal touches to make it more closely resemble number 86 when it was running out of Owen Sound, Ontario. For example he referenced Ian Wilson’s series of books to bend the bar above the cut lever just as it was back then on the prototype. 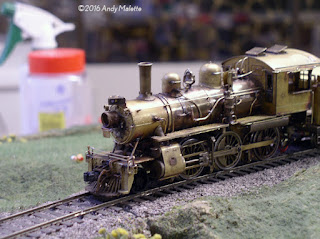 Next up will be a model of 2-6-0 number 81 which would alternate with 86 on the Owen Sound to Wiarton run. Both engines are preserved: 86 in London, Ontario and 81 in Palmerston, Ontario.
---
Paul Raham also recently finished one of the little Mogul kits, but look at how visually different his is. 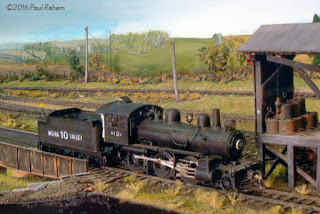 Sixty years ago is just too new for Paul. He likes railways the way they looked a hundred years ago! (As if S scale isn’t already enough work...) Among Paul's most noticeable mods to the kit are the three-window cab sides, the slide piston steam chest, the high mounted headlight and the slat pilot.
Paul’s Moira Valley number 10, as shown on his excellent home layout, most closely represents how these engines looked as first built for the Grand Trunk, the precursor of the CNR. One of these days there must be a proper telling of the many unique locos Paul has built to ply the rails of his home pike.
---
The CNR E-10 Mogul:
J.T. Robbie wrote a great little history of this diminutive but remarkable loco back in the April 2010 edition of Railfan & Railroad magazine. He presented an amazing statistic: 28 percent of these engines still survive 106 years after being built. That’s 7 out of 25!
The best kept of the lot resides at the Strasbourg Railroad. At the time of the article there were three others in the U.S. with the remaining three stuffed and mounted in various qualities of preservation in Canada.
These little locos are an ideal size for small tourist railways for much the same reasons they are an ideal size for an S scale layout.
---
Origins of the Kit:
One has to go back about 15 years when S Scale Workshop member Simon Parent decided he wanted a couple of these for himself. He’d have to scratch build of course, so he figured it wouldn’t be too much harder to build six at once… three for Oliver and David Clubine, and one for me. On one memorable afternoon we all piled into David’s truck and drove to London and Palmerston to visit the locos in person.
Originally, Simon planned to use a combination of photo etches, cast resin parts and commercial brass castings.
But we all know how project creep works. By the time we were paying our respects to 86 and 81, Simon had already produced masters for the driver centres, steam chests and pilot. When he approached S Scale Loco and Supply in the U.S. about having castings made from his masters, owner Fred Rouse was so impressed he suggested the whole caboodle be marketed as a kit.
So when is one’s scratch is built locomotive also a kit built locomotive? When you first scratch build the kit of course!

Others were impressed, too: The collaboration between Simon and Fred earned S Scale Loco & Supply the 2003 Charlie Sandersfeld Memorial Manufacturer's Award from the National Association of S Gaugers.
These kits were never plentiful in numbers and remain in great demand, so hopefully we may see a re-release someday. I’m sure they’d also be highly bashable into near models for a number of other roads. And while at it, why not offer a frame to make a free-lance 4-4-0 out of that graceful superstructure? S Scale has been crying for a decent 4-4-0 for a long time.
---
Back to Andy:
So why did it take 10 years for Andy to build his first Mogul kit? Because he’s been so busy making kits and models for others.
When Andy acquired the Mogul kit, he had just released his MLW combine kit. That was followed by the coach kit and his eight-hatch reefer kit. And let’s not forget Andy’s K-3 Pacific kits, his etched number boards, and detail kits for the Pacific Rail Shops boxcar.
Andy’s finally giving himself a well-deserved rest so he can build for himself. Thanks Andy!
---
Thanks also to other Workshop members who have made modelling the CNR in particular a much easier task. Simon has since designed a 4-6-0 and most recently that burly 2-10-2 you’ve seen (I hope) in our video from the 2016 Copetown Train Show.
The Clubines' Ridgehill Scale Models have offered wood structure kits and resin kits for the Fowler boxcar and the CN van. Pete Moffett has offered a resin kit for the CN Scale house in Brantford, and most recently Trevor Marshall is collaborating on a 3-D printed version of CNR D-1 and its two trailers, C-1 and C-2 that may also have future commercial potential.  (Trevor's note: Thanks Jim, but I'm just cajoling Stephen Gardiner, who is doing this model in HO, to scale it up for me to S. He and some other friends - notably Ryan Mendell, who cut me a frame for this project - are the real talents in the operation!)
Our group is fortunate to have such a concentration of talented modellers who hunker down and make it themselves if someone else doesn’t do it for them. Personally I can’t wait to see who does what next.
- Jim

Posted by Trevor at 1:22 PM No comments: