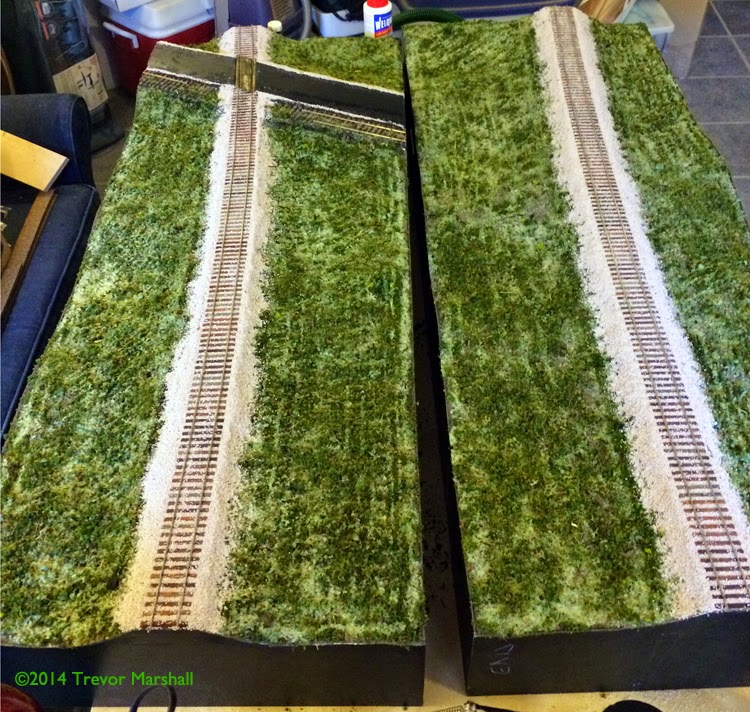 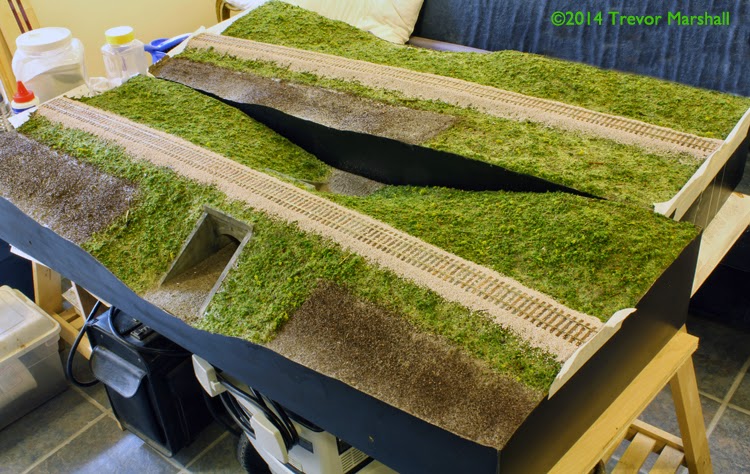 This week I finished wiring my modules, with a lot of help from fellow Workshop member Chris Abbott (thanks Chris!)

With wiring behind me, I've been able to turn to scenery. I've added basic ground cover to the four four-foot sections shown in the photos here. I've also ballasted the track.

The photos were taken while the glue was still wet, so there are some pretty evident glue streaks in the ground cover and a funky shine to some areas. That's going away as the glue dries.

(It's exactly the wrong time of year to be doing scenery, too: cool and dry air that doesn't soak up humidity, yet also warm enough that we're not running the furnace. The glue is taking forever to dry...)

While I'm making great progress, I still have six more feet worth of module sections to do: They're wired and ready to run, but still at the pink foam board stage. I'll tackle those next, to get them to the same state as the pieces shown here. Then I can try to get some more detailing done before the North Shore Train Show - happening in 10 days in Laval, Québec.

I hope to see you there! 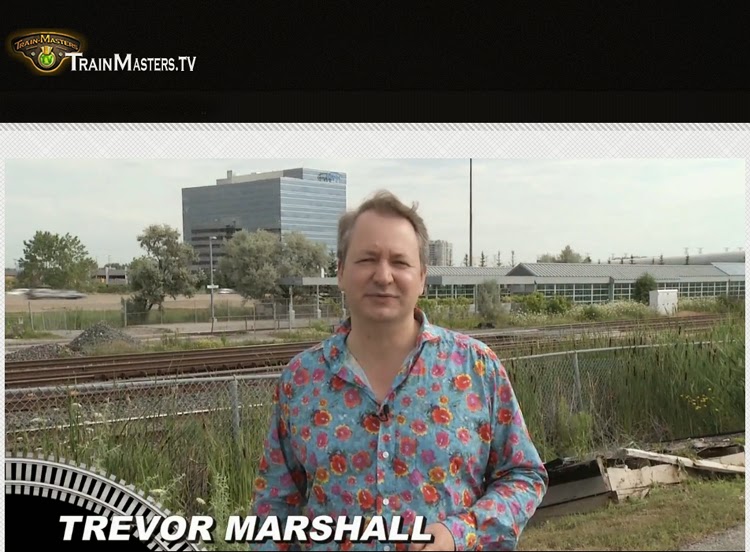 As I've mentioned previously, I'm building two modules for the S Scale Workshop - and I'm documenting them in a series of video segments for TrainMasters TV.

The first episode of what we're calling The Roadshow is now on the air. Here's the link:

(Note: there is a modest subscription fee)

In this episode, I take a tour of the places I'm using as inspiration for the modules. That inspiration involves one very colourful shirt... a trip to the country with a high-energy team-mate... a big pair of rubber boots... and a flock of stubborn ruminants.

In the series, I'll share some tricks I've learned about building modules - things that work for me, anyway. I've also been experimenting with ideas I've never tried before. Already, I have a couple of ideas from this experience that I plan to incorporate into my Port Rowan layout.

I hope you'll join me on <em>TrainMasters TV</em> to follow along as I build my modules.

Barry Silverthorn at TrainMasters TV is a professional producer and editor with a fine eye for camerawork. This is not your typical YouTube fare. In a word, it's slick. I'm tickled that Barry has welcomed me on board to do this series. His talent and commitment to creating a great show - hosted by hobbyists and focussed on this great hobby of ours - is forcing me to up my game to match.

That said, one gets what one pays for and as I noted above, there is a modest monthly fee for your subscription. But it's equivalent to buying a package of replacement blades for the hobby knife - and less if you subscribe for longer periods. I consider that a small price to pay to add such a tool to my toolbox. Even though I'm hosting this series, I'm also a subscriber.

TrainMasters TV is highly entertaining to watch and a great way to get ideas for one's own hobby endeavours. I look forward to each episode, and I hope you'll become as big a fan as I am.

I'm making great progress on Division Street as I prepare this module for the Workshop's upcoming exhibition in Laval.

Rail is mostly spiked now, and while I have not yet started to lay rail on the Judge Farm module, the ties are ready for rail so it should go quickly. 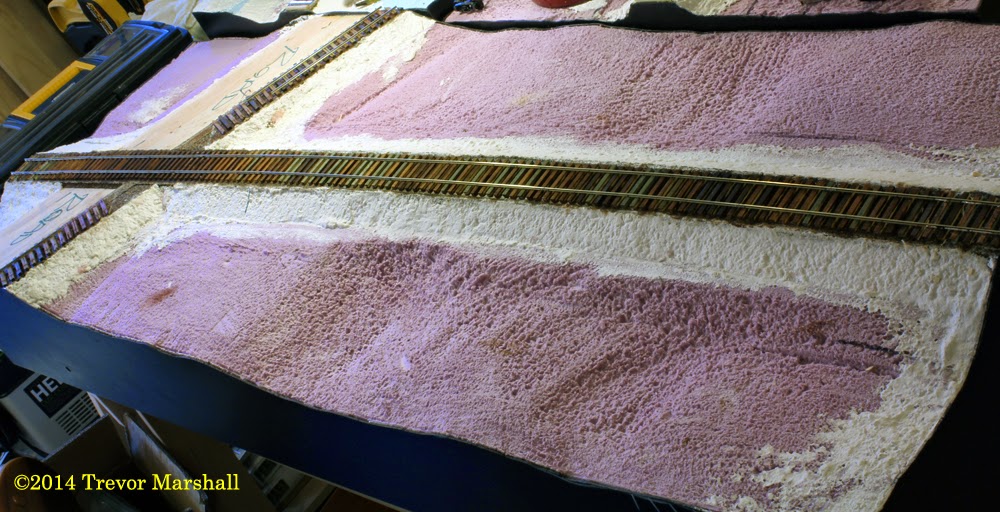 I've written a lot more about these modules on my Port Rowan layout blog. Here's the category link - enjoy if you visit!